Note that this post, as with the entire website, can be viewed in either English or Spanish, and the language can be swapped with the flag in the upper right.

Every year, my month in Spain is full. But this year, 2016, was especially so. I hope you will allow me to share with you some of the highlights. There were, of course, many meals with many friends. As I said on my home page, Spaniards are passionate about leisurely meals to enjoy the time with friends, while also savoring good wine and food. I have broken the month into five different blog posts: (1) the first week with friends and archeological studies, (2) the description of giving and recording interviews with three historians, on the sexual art on Medieval Romanesque churches in Spain, (3) more of Spain, including trips to the islands of Ibiza and Formentera, (4) the fiesta of the wine horses at Caravaca de la Cruz, and (5) the fiesta of San Isidro in Madrid, and some final thoughts. 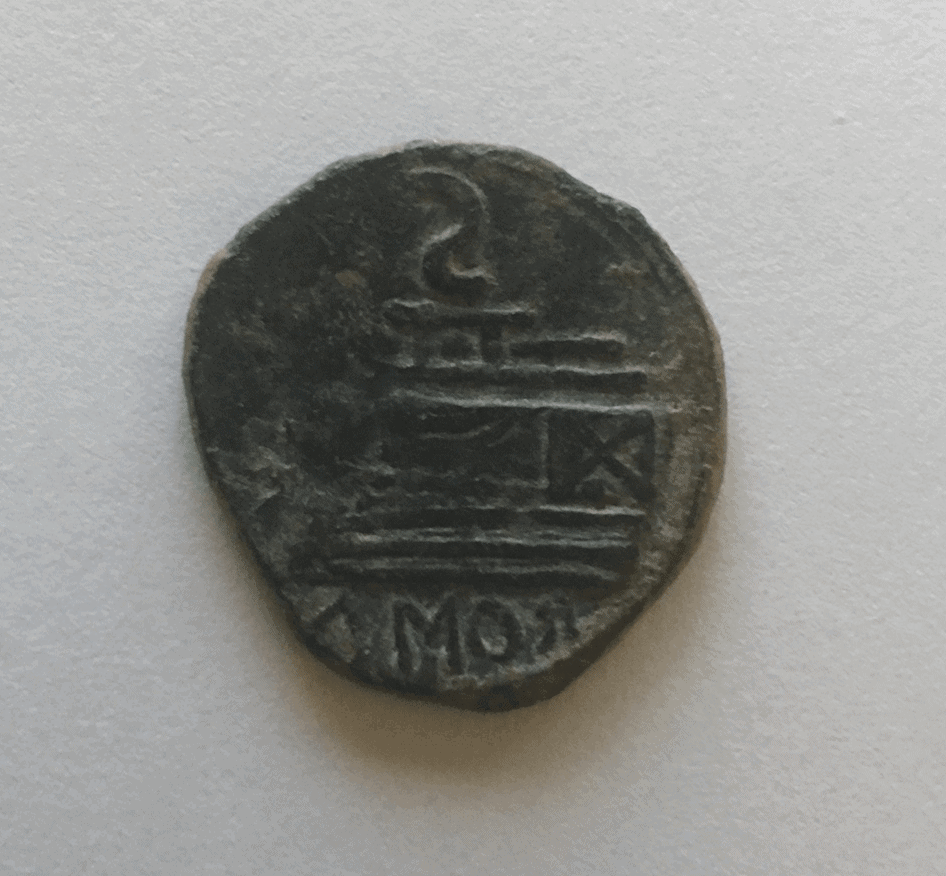 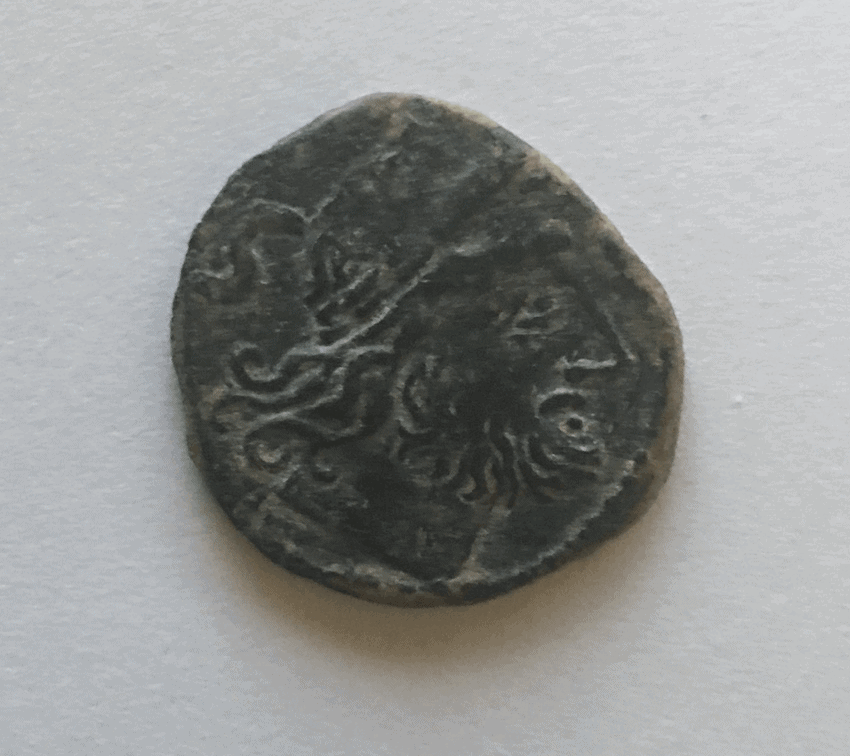 The day I arrived there was a numismatic auction, and I attended with several friends. I was able to win a coin, from ancient Hispania, an imitation of a Roman Republic coin made by the native Spaniards with permission of the Romans. The coin dates to the second half of the first century BC. This one is unusual because the engraver of the die forgot to write in mirror form on the die, and the coin came out with AMOR rather than ROMA.

Emperor Hadrian built a temple, the largest in ancient Rome, to the goddess Venus the Bringer of Good Fortune and the goddess Eternal Rome. Hadrian was clever in the fact that the goddess Venus represented love (amor), and amor is Roma in reverse. Placing the two goddesses back to back duplicated the symmetry of Roma/amor. While all this escaped the engraver of the coin die, the AMOR (with a backward facing “R”) of the coin represents love to me.

The Triple A (AAA)

Tuesday, back in Madrid from the fiesta at Caravaca de la Cruz (blog post 4), I went to the meeting of the triple A - AAA, Asociacion de Amigos (Españoles) de Arqueologia (Association of (Spanish) Friends of Archeology). I met my friends Maria, the vice president of the AAA, Maria Victoria, and Miguel. There was a presentation, after which I signed up for the AAA excursion to Alarcos on Saturday. Then a few of us had dinner with the presenter, Fernando. The conversation included the use of tools like Autocad and drones in archaeology, Iberian funeral customs, and the fact that the Iberians did not have the idea of fertility, good luck, and protection that the Romans had with phallic amulets. 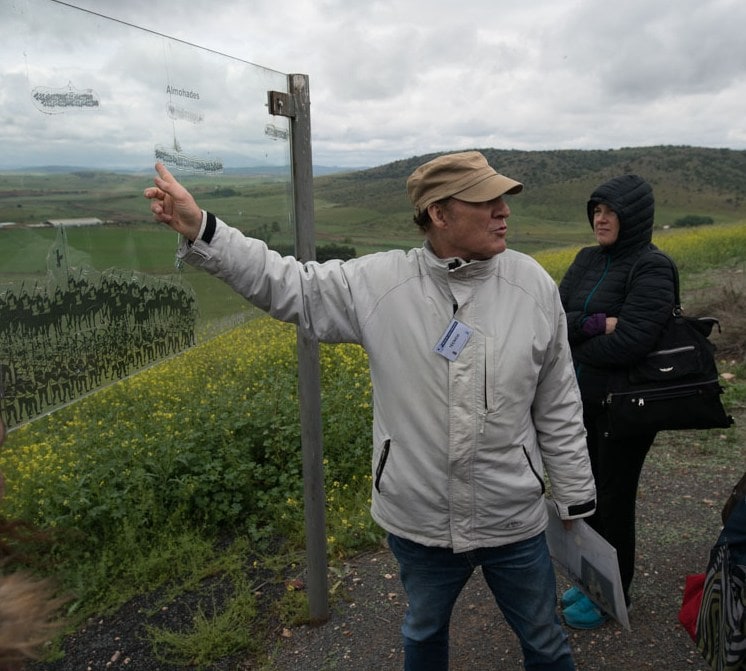 Alarcos is an important archaeological site. There are remains of an Iberian city on the top of the hill with the remains of the Medieval castle. Some of the Iberian city has been excavated and dates from the fifth century BC.

The Iberian sanctuary was at the highest point, to be seen from all of the city, as are many churches in Medieval towns. Our guide, Pepe, shared that the ancient Iberians had sex in the sanctuary, but for procreation, not for pleasure. I wondered how is this known?

Pepe told us that Euskera, the Basque language, is the closest to the ancient Iberian language. He recited a phrase from Euskera while near the top of the hill. When he shared this phrase in Spanish and the women in our group seemed to appreciate it, I asked him to repeat it so I could record it. The phrase was: “Maybe for someone else you are not anybody, but for me, you are the world.” Another one Pepe shared was, “Once time has passed, it never returns.” That is something we would all do well to remember. There is also a Spanish saying – once the water has passed, it doesn’t turn the mill, which in addition to the passing of time can carry the idea of a missed opportunity. A corollary might be let the past stay In the past.

The city of Alarcos was destroyed in a significant battle in 1195, part of the Christian reconquest of Spain from the Moors. There is a small museum that is well worth the visit. Maria Rosa added some interesting information to the tour given by Pepe, pointing out a star of David in the stonework inside the church door, among other things.

We then went to nearby Ciudad Real, now a fairly large city, to which the Christians retreated when the Moors conquered the castle at Alarcos. Most of the tour group went to the Cervantes Museum, as it was the year of Cervantes. But Maria, Maria Victoria, Miguel, and I escaped directly to the archaeology museum, of more interest to us. We enjoyed the time there but were greeted with "where were you?" when the rest of the group came to the archeology museum.

Then we had a fantastic lunch. Fortunately for us, the fellow who made the arrangements for the trip gives a high priority to good food. The first plate was a tasty pheasant salad, which I had never had. A big good meal is usually followed with a liqueur. I had had a good conversation with Geraldo, and he shared a story that involved Machaquito / Machaco (anis). When I asked what that was, he gave me a surprised look and got up, looking for a waiter. He came back with a disappointed look on his face and explained that while they had anis, they didn’t have anis Machaquito. Another day, another lunch. 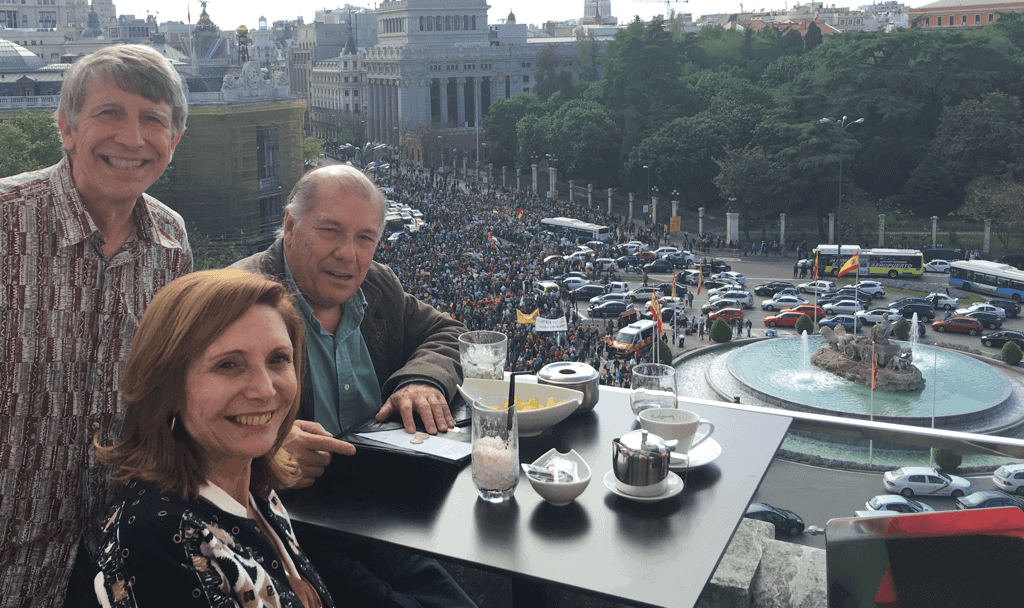 Pedro and Yvonne are simply the best neighbors we have ever had, and I have stayed in contact with them all these years. I visited the reformed National Archaeology Museum with them. Then we went to a renovated palace that is now City Hall, at the Plaza Cibeles, on the Castellana Street. We were enjoying a cocktail on the roof when a massive demonstration came up the Castellana and turned at Cibeles towards the Gran Via. Pedro explained that it was a demonstration for Podemos (we can), the ultra-left party.

There were all kinds of signs and flags being carried, from the gay pride flag to the Palestinian flag. Pedro shared some recent news from Barcelona, where the Podemos party has won various positions.

On the streets and in the metro in both Barcelona and Madrid, there are often African street vendors, who sell everything from counterfeit DVD's to sunglasses to purses. Their items are usually spread on a canvas tarp on the ground, with ropes joined to each corner. This allows them to quickly pull up the tarp with all items inside, sling it over their shoulder, and run from the police. 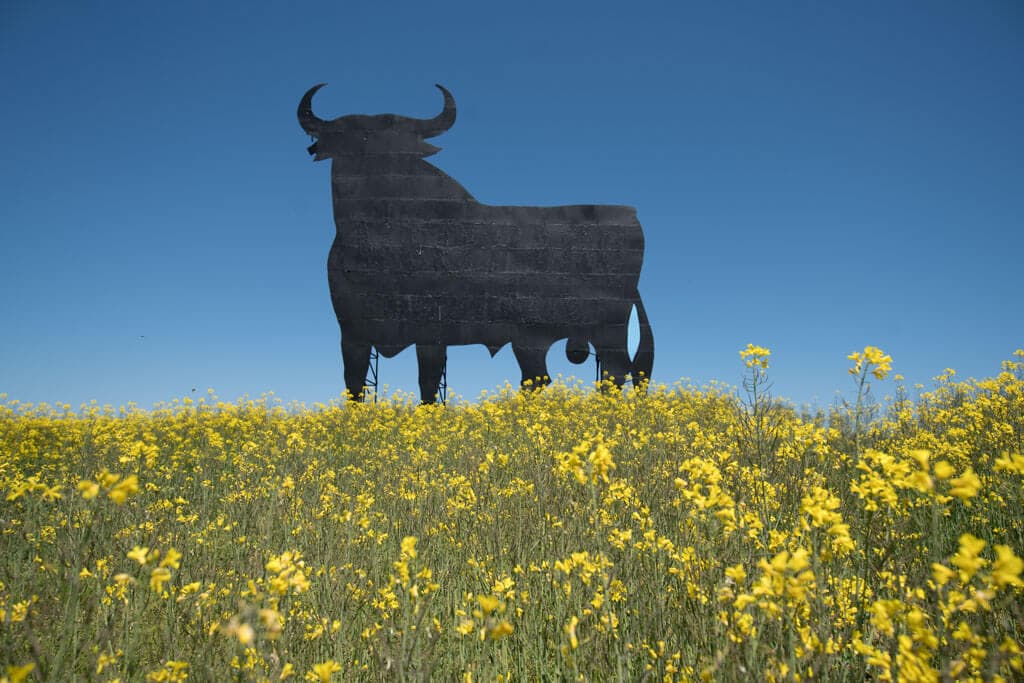 I enjoyed my first week back in Spain, seeing old friends and neighbors, and sharing new good times accompanied by tasty food and wine. This is what Sensuous Spain is all about, and why I keep coming back. But I have four more blog posts describing the rest of the month.